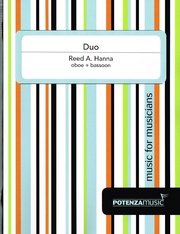 The Duo for oboe and bassoon was written in late 2015 for two of my former teachers, Dr. Stephanie Caulder and Dr. Jason Worzbyt, whose performances always inspired me as a young musician. This piece was premiered at the 2016 International Double Reed Society AnnualConference at Columbus State University in Columbus, GA. The first movement is a fun exploration of the possibilities of the scalar collection E-F-G-A-Bb-D, where C/C# are used as color tones. In this collection E and Bb are used as central pitches, creating a pervasive unresolved feeling, even when combined with a more traditional tonal language.

The second movement is a sultry tango in Bb minor that utilizes the lyrical and expressive capabilities of both the oboe and the bassoon.

The third movement, Rondo funk, is an exploration in miniature form. As the title suggests, the movement is kind of like “a rondo in a funk” and is also heavily influenced by popular styles. The rondo form remains intact until the third statement of the 8-measure rondo theme, wherein this theme is continually interrupted by fragmented recapitulations of previous episodic material (clearly, a “rondo in a funk”). The movement ends with an exciting coda.