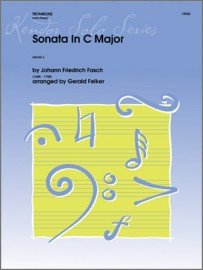 This Johann Friedrich Fasch piece, originally composed for bassoon, has been performed by instrumentalists other than bassoonists for decades. This edition for tenor trombone requires a skilled trombonist (grade 6) who possesses great dexterity with the slide. The tessitura has been carefully altered so that it falls within a range that is more suitable for the tenor trombone, eliminating notes that were below the staff. Trombonist Gerald Felker has carefully edited this piece so as to not compromise the musical integrity. Total duration 15:45.