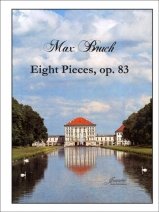 Max Bruch (1838-1920) was captivated by folklore and folk songs which became the inspiration for some of his best known works, including Kol nidrei and Scottish Fantasy. The 'Eight Pieces' for clarinet, viola and piano were composed in 1910 for his son, Max Felix. However, to broaden potential sales, they also appeared in an alternative version for clarinet, cello, and piano. Bruch himself indicated that all eight pieces need not be played together, but he also gave no indication to suggest any particular combinations.

Many errors including missing accidentals and clef changes as well as inconsistencies of articulations, rhythms and dynamics between the piano score and the individual instrument parts are found in the original publication. This new edition, edited by John Anderson, has corrected these errors and inconsistencies. The cello part in the original publication was essentially a duplicate of the viola part, but several measures were omitted in selected passages. This new edition includes these missing spots as an ossia to be played at the discretion of the cellist. In addition, the viola part includes suggested fingerings and bowings by Korey Konkol. Similarly, the cello part has fingerings and bowings suggested by Tanya Remenikova.

The set includes parts for clarinet, viola, cello (alternate for viola), and piano. All eight movements are bound together in one set.