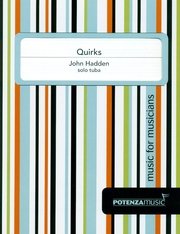 “Quirks was an idea long in the making. About five months before I started grabbing the notes of Quirks out of the tuba, I, as a tuba player myself, made a firm decision to compose a piece for unaccompanied contrabass tuba for an upcoming recital. As the composition developed, it eventually became a short four-movement reflection on the “quirks” of friends, family, and colleagues. Unpredictably is characterized by loud outbursts in otherwise quiet and melodic music.”- John Hadden