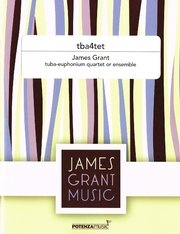 "tba4tet, scored for two euphoniums and two tubas, is a three-movement, twelve-minute work composed for a consortium of 48 participating commissioners. tba4tet was premiered in Cincinnati, Ohio, at the 2008 International Tuba Euphonium Conference, by an all-star group comprised of Matt Tropman and Kelly Thomas on euphonium, and Mark Nelson and Don Harry on tuba.

Mvt. I is called Care to Dance? It begins with a non-threatening idea that becomes increasingly curious and twisted as it develops -- as though Fellini and Reger got together for a few beers, then tried to waltz around the room but always found themselves slipping into a congenial, if not slightly off-balance 5/8. (Much to my surprise, Care to Dance? decided to end as a fox trot.)

Mvt. II, Convocation, conjures images of an assemblage of people who have come together in unity to acknowledge an occasion of supreme significance in the community. The spirit of the music, both solemn and celebratory, speaks to integrity, respect, and justice.

The title to Mvt. III gives away its contents: Étude / Attitude starts off innocently as a seemingly predictable etude for quartet, with the members exchanging phrases and figures based on octatonic scales. Soon enough, however, 'attitude' comes into play, and the music slowly but surely gets unruly as it morphs into a highly- syncopated rock chart, with an occasionally interspersed chorale thrown in for good measure.

Notes on tba4tet would not be complete without drawing attention to the efforts of my good friend and colleague, tubist Mark Nelson, whose administration behind the scenes served as both the cornerstone and the backbone of this commissioning project. Mark not only came up with this tuba quartet consortium idea in the first place; he served as its secretary, treasurer, and principal cheering section. Mark's and my 15-year professional alliance shows no sign of letting up -- it continues to be productive, rewarding, and downright fun; and I eagerly look ahead to our next project.

tba4tet is dedicated "to the brave souls of the 2008 tba4tet Commissioning Consortium," and with good reason -- each member of this consortium invested in the project not having any idea what was going to appear before them. With gratitude and humility, I salute them all for their willingness to step out on this artistic limb with me."