Dauverne, Francois: The Dauverne Solo Collection for Trumpet in Bb and C 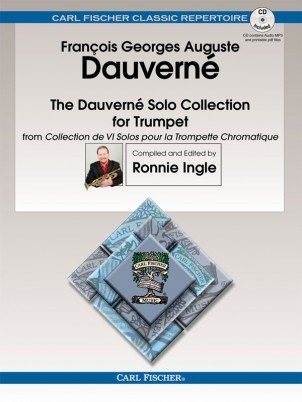 This collection of solos, composed by François Dauverné, is unique in that they are among the very first solos ever written for the valved trumpet, culled from Collection de VI Solos pour la Trompette Chromatique. The collection comes with a CD that contains piano accompaniments as MP3 files and printable PDFs, as well as printable PDFs of Trumpet in C parts. Dauverné was the first trumpet teacher at the famed Paris Conservatory and maintained that post for thirty-five years. He was also the teacher of such notable students as Jean-Baptiste Arban and Louis Saint-Jacome. As a performer, Dauverné was first trumpet in the Paris Opera Orchestra for over thirty years. Dauverné is credited for being one of the first individuals to play on the valved trumpet in a public performance, and convinced such composers as Berlioz, Rossini, and Meyerbeer to write for the instrument. This collection of six solos was originally composed for solo trumpet and chamber orchestra. AssociateProfessor of Trumpet at the University of North Dakota Ronnie Ingle has meticulously transcribed and edited these groundbreaking works for solo trumpet, and has made available here for the first time a modern edition for solo trumpet and piano. This is a collection that all trumpeters should have in their library.