Self, Jim: HoopLA for Brass Quintet 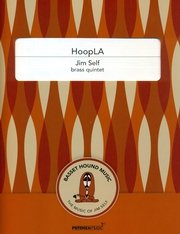 “For many years I have coached brass quintets at the USC Thornton School of Music. One of the outstanding young quintets was the Valente Brass: Yurie Yoshida, and Jessica Cruz, Trumpets; Erika Miras, Horn; Jonathan Sie, Trombone; and Jake Kraft, Bass Trombone. They kept urging me to write a quintet for them and thus was born HoopLA. This short (4:30 min) one movement piece was premiered by them at the “Live at Basset Hall 8” concert, April 13, 2014. It was during this same time that I was writing two other works, Intrepideedoodah and Pocket Change. In all three I used 6/4 meter as the main rhythmic structure. I call it my 6/4 “period”. That meter translates easily into 12/8 and many other groupings of 2s, 3s, 4,s and 6s—the glories of hemiola abound. A unison intro leads to a Latin set-up in the trumpets and a tricky groove in the trombones. The horn has a haunting melody over that. A middle waltz section follows with imitative solos in the trumpets and a series of duets between the all of the players—giving the impression of odd meters. The main theme returns with a rousing ending. The brass quintet members named the piece HoopLA and, as the title suggests, it’s a lot of fun in Los Angeles.” -Jim Self