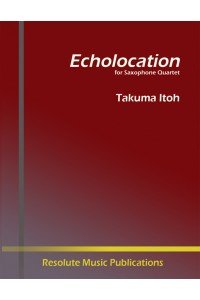 Echolocation was inspired by sounds created by exploring the concept of a delay, a very fundamental electronic music effect, and looking for ways to translate this idea through acoustic instruments alone.  The delay effect, in which the initial sound is played back multiple times after a period of time with decay in the loudness, creates an effect of an "echo."  What particularly piqued my interest was when I started experimenting with layering different rates of delays simultaneously to create a rich, intricate texture of polyphony and polyrhythms.  I attempted to recreate this sound acoustically using just the saxophone quartet and used this idea of the delay as the recurring "theme" of the piece, but varying the delay lengths and decay times to create different sound possibilities. --- notes by the composer