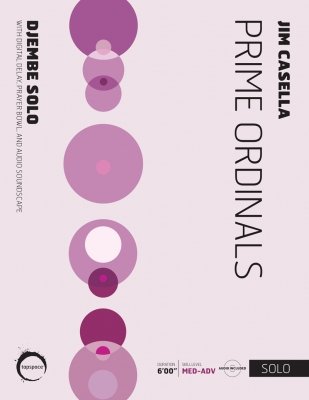 Prime Ordinals is a unique solo by Jim Casella for amplified djembe with a prayer bowl and audio soundscape. The piece is formed through an ordered sequence of prime numbers in which the ordinals occur as note groupings, meters, phrasings, or the number of semitones spanned by the portamento in the soundscape accompaniment.

The soloist is called on to create a variety of timbres from the djembe through different striking or muting techniques. The sound from the djembe is also being sent through a digital delay effect at a rate of 333.33 milliseconds. The delay effect plays a critical role in the rhythmic outcome when combined with the sounds originated by the player. The resulting whole represents a unique interplay that is deliberate—even chaotic at times—but always greater than the sum of its parts.

Prime Ordinals comes with a customized software player (compatible with Mac or PC) that serves as an interface for audio inputs, built-in delay effect, soundscape playback and mixing, as well as giving the performer the ability to monitor the soundscape with a click track to ensure a synchronized performance.