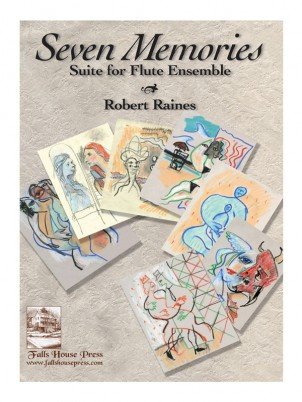 More often than not, composers will take inspiration from those who have come before, whether 300 years or 30 years before. Raines unabashedly takes his cue from both Stravinsky's Pulcinella and Brian Wilson's Surf's Up (here, the title of the second movement) for his Seven Memories. Further, he points out that the work "is of moderate difficulty, with some quartertone writing, and a few brisk tempos, but should present few problems for good ensemble." The premiere took place at Florida State University in April 2015, with another performance at the 2015 National Flute Convention in Washington DC. For advanced ensembles.