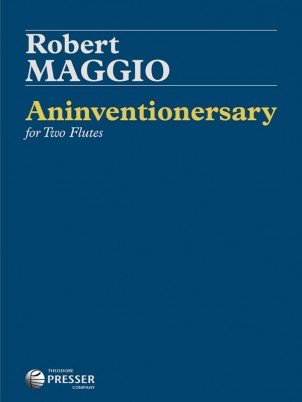 Aninventionersary was composed for Mimi Stillman and Jeffrey Khaner, in honor of Julius Baker and in celebration of Stillman's ensemble Dolce Suono's 10th anniversary. For the Bach-themed concert, Maggio chose to incorporate motives inspired by Baker, Stillman, and Khaner, their names, the syllables therein. While this would be a trial for most composers, what Maggio has attained is "a series of warmhearted melodies that tag-teamed each other and then stylishly turned into something distinctly Maggio." (David Patrick Stearns, Philadelphia Inquirer) For advanced performers.