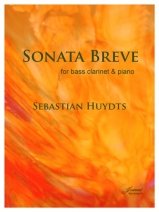 Sebastian Huydt (b, 1966) composed "Sonata Breve" in Barcelona in June of 2006 for bassoon and piano. It was transcribed for bass clarinet and piano in 2010. Summer in Barcelona - with its bright sun-lit days and wonderful summer festivals of art, music and dance - almost forces one to see life from a positive perspective. Inspired by some marvelous exhibitions, concerts and dance performances, Huydts centered this sonata on decidedly lyrical diatonic elements and intended [at least in character] for it to be a companion piece to Prokofiev's Sonata for Flute.

The music consists of three movements. The opening melody of the first movement, introduced by the bass clarinet, forms the foundation for the entire work; all subsequent themes and motifs are derived from it. The second movement, the most serious of the three, is a small tribute to Gyorgy Ligeti, followed by a last movement that is a tribute to virtuosity in folk music. The latter bears the subtitle "Cuando suene la hora", which, loosely translated, means "when it's time", referring to something unavoidable [such as death or taxes). Indeed, the music rushes unavoidably to the end, but does not provoke the uneasy feeling suggested by the title. However, if we do not translate the word "hora", the title reads "When the Hora sounds", which, to anyone familiar with music from the Balkans, makes perfect sense. Duration: 18 minutes