Stamitz, Carl: Concerto No. 3 in Bb Major for Clarinet & Piano 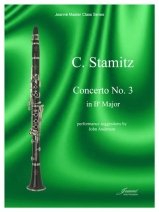 This new edition is one of the Jeanne Master Class Series. It is typical of instrumental concerti in the Mannheim period consisting of three movements, with a slow expressive movement between two faster movements, the final one a rondo in 6/8. It was written between 1777-1782. This edition for clarinet and piano includes extensive performance suggestions by John Anderson including a complete (optional) ornamentation of the slow movement.