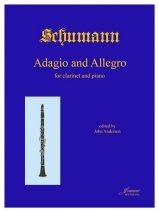 Robert Schumann's Adagio and Allegro, op. 70, was composed between February 14th and 17th, 1849. This was a particularly productive period for the composer, during which he produced a number of diverse works in rapid succession. During the same week, between February 11th - 12th, he also composed the Phantasiestucke, op. 73 for clarinet and piano, followed by the Konzertstuck for four horns and several choral works. The Three Romances, op. 94, for oboe and piano were composed later during the same year. Although the Adagio and Allegro was originally written for the horn, it is a popular work on concert programs performed by a diversity of instruments.