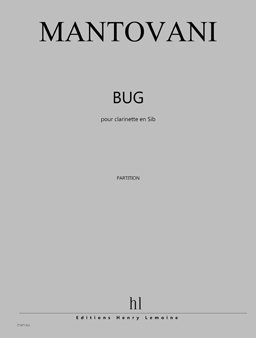 The highly virtuoso yet unstable work Bug was given its first performance on 6 February 1999 during Mériel festival by its dedicatee Philippe Soured. It is a musical metaphor of the disarray caused by an imaginary computer break-down (fortunately not predicting what might have happened on 31 December 1999). Although at the outset most of the rhythmic formulas are multiples of a common unity (the semiquaver), the music becomes less regular with the appearance of specific dynamics which often contradict the melodic profile. Similarly the numerous trills, bisbigliandi and varied articulations all contribute to give a feeling of extreme density to these opening bars.

Progressively the music seems to escape from the performer, and rapid passages replace the regular beat of the start of the work. Following a brief moment of calm, virtuosity comes to the fore, leading to a point of no return, a high note played ffff. Everything seems to disintegrate at this point, with disorientating quarter-tones, as if the pitches were melting into one another. The piece concludes with sustained notes, the sole survivors of the micro-tonal melodies.