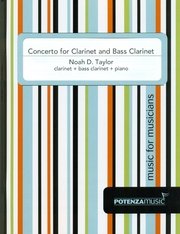 The Concerto for Clarinet and Bass Clarinet was commissioned by a Potenza Music Publications Consortium and was written for Dr. Robert Spring and Dr. Mathew Miracle. The work was premiered by the duo at the 2014 International Clarinetfest. As a composer, Taylor has always sought to capture the exciting and sweeping qualities of orchestral and film music in his own works and the double concerto is no exception. Cast in three movements, this work not only showcases and challenges the soloists, but also provides the listener a captivating a memorable experience.

The first movement of the work opens quietly and calmly as each of the clarinets are introduced. After the haunting introduction, a fun and quirky dance ensues, marked by flashy melodic lines and asymmetrical rhythms. This work allows the clarinetist to show off the fun character of the clarinet. The second movement starts with a slow and haunting treatment of the theme, but soon gives way to a passages that become more flowing and expressive version. This middle part of the concerto allowed Taylor to writepassionately and romantically, and unbound by traditional form. As the movement fades away, it is meant to lead the listener to the fiery third movement. The third movement bursts into the exhilarating and vigorous first subject, which features a thrilling rhythmic motif and interchange between the two soloists and accompaniment. As this scherzo-like movement develops, Taylor transforms the theme rhythmically driven passages followed by hauntingly lyric sections. As the piece builds, themes from the first movement return to tie the work together. At it's climax the Double Concerto ends with fiery virtuosity and powerful harmonic drive.