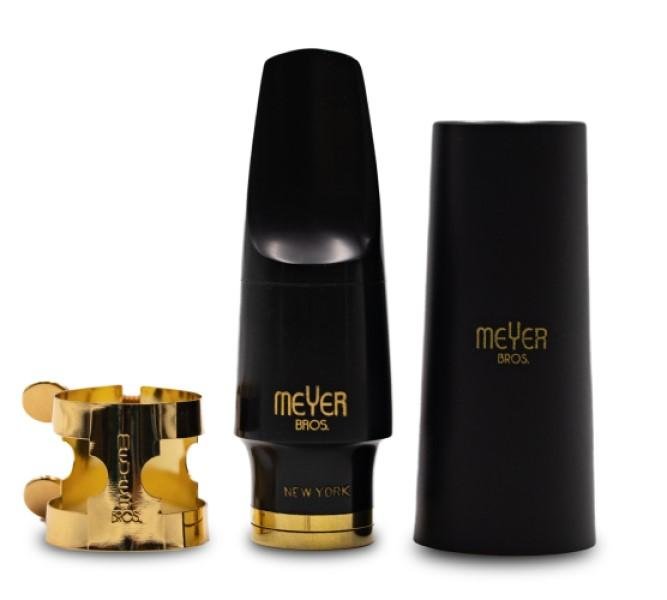 The original vintage New York Meyer Alto Sax mouthpiece is the most sought after mouthpiece in history. As time went on and Meyer (whether the original Meyer or JJ Babbitt who makes Meyer today) continued to modify their mouthpieces, many players have sought to reclaim the performance of previous models. This has driven the pricing of vintage New York Meyer’s into the 4 digit price range! As a result, JJ Babbitt has sought to bring back much of the performance characteristics of the history of the Meyer brand, offering players the choice of performance styles in modern mouthpieces. The first of the line was the 100th Anniversary “NY Meyer” models which have been a huge success. Now, Babbitt continues this with the Meyer Connoisseur Alto Sax Mouthpiece!

The Meyer Connoisseur alto mouthpiece is based on the original Meyer Bros New York mouthpiece that Cannonball played on and had retro-fitted with a brass retention ring due to a crack in the mouthpiece shank. This new model is a warmer, richer tone than the NY Meyer models while maintaining great response and control.

Molding a mouthpiece requires many unique tools. With the Meyer Connoisseur Alto mouthpiece, Babbitt has returned to using the Original Molds (exterior shape), Cores (chamber and shank) and Facing Cams (creates the facing curve & baffle) used during the Meyer Bros production. This means that these are truly the ORIGINAL mouthpiece re-born, not just a “marketing” gimmick but truly a great mouthpiece brought back from the most legendary brand.

In addition to the original manufacturing tools, the Connoisseur models feature a rubber that has an enhanced vulcanization process the more closely emulate the original hardness/density of the original mouthpieces. Increased time in the hand finishing of these models yields a higher quality mouthpiece that brings out the performance of the original design.